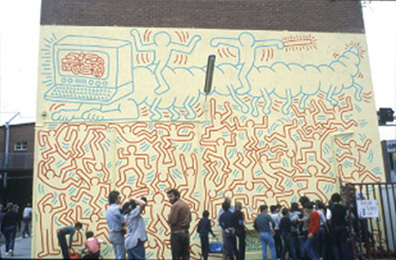 Strength in numbers? People power? All the above. It’s a call to arms to all my readers, fans and supporters of the theaussieword blog from around the globe. Take a read at some of these excerpts taken from emails and sites relating to the famous 1984 mural by American artist Keith Haring.
The mural is in danger and we need your help… 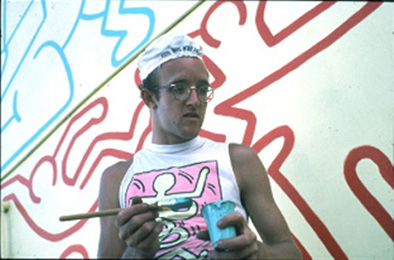 Keith Haring painted this mural on his one and only visit to Australia in 1984. It was painted in one day on the exterior of what was then the Collingwood Technical College at 35 Johnson Street, Collingwood. The mural brought a great deal of delight to the school and locals for many years, and has become part of the cultural fabric of the Collingwood community.


Despite being in the care of the Victorian Government all this time, and registered as a site of state significance with the Victorian Heritage Council, the mural has received no regular maintenance of care since its making. It now exists in a severely faded and deteriorated state.


Recently the old Collingwood Technical College site was announced as the new home for Circus Oz which is an extremely positive development. New tenants means a redevelopment of the site and the Victorian Government is now making plans towards the site’s regeneration and the handling of the mural.

Despite the advice of the Haring Foundation and various members of the Australian and international contemporary art community (Jeffrey Deitch, Elizabeth Ann Macgregor, Tom Eccles, Juliana Engberg, Lisa Phillips, Chris McAuliffe, Terry Smith), the Victorian Government is proposing to spend $1 million in a conservation project that will see the mural stabilized and preserved in its current state.

This plan of action directly contravenes the stated wishes of the Haring Foundation, established by Keith before his death to represent his interests, which has requested the work be re-painted at its original site and returned to its intended vitality. They do not believe Keith would have agreed to, nor wanted, an excess of money spent on preserving the mural in its current state. They believe he would have wanted it re-painted in a quality-controlled environment by a skilled sign writer and, in turn, gifted to new generations.

Time is now of the essence. We are in our last weeks of working to ensure the Victorian Government respects the rights of the artist in any and all decision regarding his work. If the artist or his representative state their wishes for the future and care of the mural, what right and on what authority do the Victorian Government or team of conservators have to claim this belief is invalid, wrong or irrelevant.

Please take the time to visit our Save Melbourne’s Keith Haring Mural website. You will find here background information on the mural, along with documents outlining the Victorian Governments plans for the mural’s conservation and the Keith Haring Foundation’s response to this. Please be sure to add your voice to the fight and email your pro forma objection letter to the Arts Minister and Arts Victoria ASAP. Every voice counts. If this was your work would you be willing to let someone else make a decision on its future?

A rising star in the international art world, American artist Keith Haring visited Australia in 1984 on the invitation of John Buckley, the inaugural director of the Australian Centre for Contemporary Art. During his three-week visit Haring created a number of temporary works, including a mural on the National Gallery of Victoria’s waterwall and in the Art Gallery of New South Wales’ foyer, and created a number of ephemeral works, including small graffiti pieces along the Yarra River and a body art work for the Melbourne Fashion Festival. He also created a series of paintings which were exhibited at ACCA on its opening. Of all the works made by Haring while in Australia, only one work was intended to be permanently sited in a public space. This was the outdoor mural he painted at the Collingwood Technical College in inner city Melbourne. Organised by Buckley, Haring painted this mural in one day in front of an audience of students and local residents. Captured with his typical bold and energetic use of colour and line, its pictorial content includes a giant worm with a computer monitor brain positioned above a cast of dancing figures. 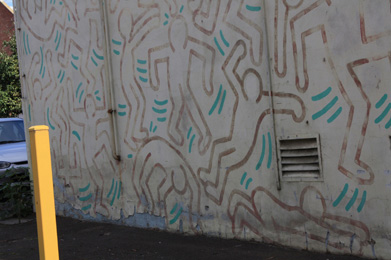 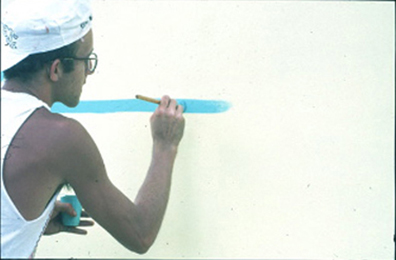 While visiting Australia in 1984, American artist Keith Haring painted an outdoor mural at the Collingwood Technical College in inner city Melbourne. This mural is the only remaining publicly-sited work made during Haring’s three-week visit. More than 25 years later, the mural is now a shadow of its former self with a bleached pallor that has overcome Haring’s signature sensibility of life and vitality. Despite being in the care of the Victorian Government and registered as a site of state significance with the Victorian Heritage Council, the mural has received no regular maintenance or care since conception. Recently, positive steps have been undertaken to develop the old Collingwood Technical College into a home for Circus Oz and other organisations. As part of the proposed development, the Victorian Government, along with Arts Victoria, has commissioned a Conservation Management Plan (CMP) that proposes spending 1 million dollars of taxpayers money on stabilising the Haring mural in its current neglected state. This plan directly contravenes the wishes of the Keith Haring Foundation, which was established by the artist before his death. The Foundation have publicly stated that they wish to see the mural returned to the people of Collingwood through its re-painting. They do not believe Haring would have agreed nor wanted to see an excess of money spent on preserving the mural in its current state.
Help Us:
As members of the public who admire Keith Haring’s work and believe that the wishes of the artist should be respected in any and all decisions regarding his work, we urge you to write to the Premier of Victoria and the Minister for the Arts, Ted Baillieu, and the Director of Arts Victoria, Penny Hutchinson, to object to Arts Victoria’s current plan for the mural. Let’s work together to see the Keith Haring mural in Melbourne, a major work by one of the late twentieth century’s most significant artists, treated with the care and respect it is due. Let’s make sure it is treated as Keith would have wanted: re-painted and returned to the Collingwood community.
www.savemelbourneharingmural.com.au
Here’s how you can HELP… click on the Help option here: www.savemelbourneharingmural.com.au/help and choose any of the options by sending an email or letter of concern. The email links will auto populate the text, all you have to do is sign it with your name! Get your friends involved, link this post via Twitter and Facebook to generate as much publicity as possible!
Art is very much a part of Melbourne’s rich and diverse culture. Let’s do our best to respect Keith’s wishes.
Thanks for supporting!
theaussieword