theaussieword.com chats exclusively with The Autumn Stones.
Give us an introduction. How did it all begin? What had you first interested in music?
It all started for me in high school. When I first started listening to punk bands like the Sex Pistols and saw the kind of excitement surrounding them, I thought at the time it would be the coolest thing in the world to be in a band just causing a fuss. But even as a child before I considered being a musician the power of music was evident. Studies have shown that nothing affects the human brain quite like music. It lights it up like a Christmas tree.
What motivates or influences you in your quest to make great music?
At first when I was in high school I suppose I was looking for something to latch on to as those were times when I really felt like I didn’t belong. But once I got into the craft of songwriting it took on a life of its own and I became quite obsessed with getting good at it. It became a vocation. We are influenced a lot by our favourite artists but also by everything around us. I have a pretty keen interest in psychology and science in general. To tell stories that are going to resonate with people, I think it’s important to try to understand what makes people tick. It’s really nice that we are getting some support from critics and fans lately. Hearing about how much some people love the music we are making is motivating. Ultimately, I’m trying to add a little bit of beauty to life for myself and hopefully for others.
What are your biggest goals you hope to accomplish as an artist?
To make one classic album. It’s a lofty goal but you only get one life, so you try. As a young man when I still lived with my parents, I would always have copies of some of my favourite LPs posted on my wall as a reminder. The Stone Roses’s first record and Guided by Voices’s Bee Thousand were among them. I seek to make the kind of music that connects with you on a deep and profound level. Music that takes you to Cloud 9.

What can we expect from you in the coming months? Any plans to tour?
We have a video for the single “Endless War” that will be coming out in late August. That was a lot of fun. We’re also hoping to put together a tour but that is still in the works. We hope to get out to Europe and the U.S. soon. Australia would be really exciting, too.
Tell us a bit about your latest album and how would you best describe your music?
Escapists is an album that took a long time to develop. We began back in 2011, shortly after releasing our first album, Companions of the Flame. The songs talk about a myriad of things that interest me: love, sex, death, religion. Thematically, they all seem to deal with liberation and connection. I’ve always admired writers who can deal with subject matter that could potentially cause a little stir rather than just kicking at open doors. I feel like that is a big part of what art is for: Saying what others are feeling but wary of saying out loud. I get my “spiritual” fix from music. So, hopefully this is what Escapists does for listeners. The style of music for me is not so important as the effect it has on you.
Success, what is the secret to it?
The secret to artistic success is persistence. It’s learning from the masters and learning from your mistakes. It requires lots of patience, passion and trial and error. I can’t really speak to the commercial success side of things — but that’s how you make good music.
What has been your biggest career highlight?
Having our album written up on some renowned websites like Popmatters and The Quietus was really cool. But the biggest highlight was hearing the finished product of the songs on Escapists. They are as close to a definitive document of those songs as we could get. That is where you want to be as a recording artist.
Which stars of the music industry do you find inspiring?
Right now, Beach House, St. Vincent, The War on Drugs, Future Islands and The National are all doing really inspiring work. I like artists that take you to that special place I was describing earlier. I saw Beach House in Central Park in summer 2012 during a thunderstorm. It was the perfect backdrop to their music. Very compelling. Victoria Legrand is such a great tunesmith and singer. One of the best around right now.
Any new projects in the pipeline?
At the moment, we’re focused mainly on promoting the new album but I’m always writing. A good chunk of the next album is already written but developing those songs as a band will probably take a few years to get ready for recording. One of the new songs is called “Lovelife” and I think it is one of our finest and possibly our next single. I look forward to the next project as we continue to push ourselves and improve but, for now, sharing Escapists with the world is our focus.
The music industry is huge, where do you see yourself a few years from now?
A few years from now I hope to be still putting out records and improving. I also hope we will have had the opportunity to bring our music to audiences around the world. To play for you, dear reader. 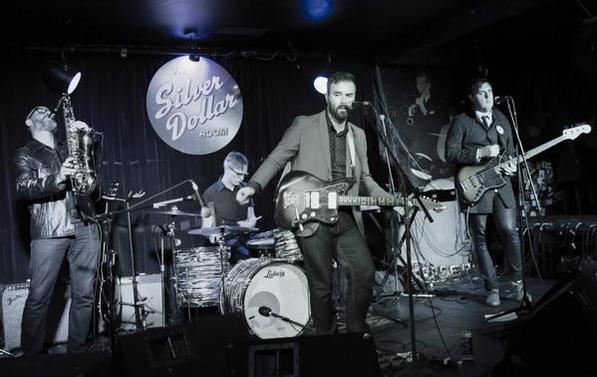 Name a few of your favourite Aussie artists.
Crowded House is the first to come to mind; Neil Finn is brilliant. The Go-Betweens, Tame Impala, Kylie Minogue and Nick Cave. Our sax player loves The Church and told me that one of the reasons he joined up with me is because a song I did with my previous band, The Assistants, reminded him of early Church. He also loves The Saints and is hugely influenced by Ed Kuepper & Louise Elliott’s work in Laughing Clowns. My mom and dad very nearly moved to Australia after getting married in 1970 but chose Canada because a few relatives from Northern Ireland had already moved to Canada. So I narrowly missed being born an Aussie myself and often wonder what life would have been like had they done so.
The shape of the music industry has changed significantly over the years, including the use of social media, how do you feel about the industry as a whole and what does it mean to you in getting your records out into the public eye?
Our careers have only really existed during the social media era so we don’t really know what it was like for artists before. The cost of recording is a little cheaper but that just means that the promo side becomes more important and valuable. I don’t think the new so-called DIY paradigm is necessarily much easier or better for artists. We are expected to wear more hats, I suppose. I don’t think that’s good. On the other hand, the opportunity to easily reach out to bloggers and other media through social media does give artists new opportunities they didn’t have before. But that also creates a glut of artists at a time when the outlets that promote them are having a hard time staying afloat. Digital networking is affecting a lot of industries’ business models but it’s really hard to say if it’s good news or bad news. At the moment, I’d say it’s a wash. Yesterday’s major label barons have given way to today’s digital overlords. It may be a slight improvement overall but who knows?
Thanks for the interview! What final message do you have for us today?
You’re very welcome. Thanks for the chance to blather on about ourselves. Our parting message to our fans is thanks so much for listening, and to those who have not heard us: What are you waiting for? Get on that!
Website: http://theautumnstones.com
Facebook: http://facebook.com/theautumnstones
Twitter: http://twitter.com/theautumnstones > @theautumnstones
Bandcamp: http://theautumnstones.bandcamp.com
Soundcloud: http://soundcloud.com/theautumnstones