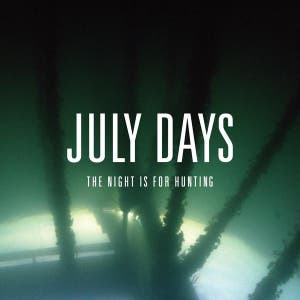 It’s been quite a journey for Melbourne-based indie rock outfit July Days since they formed in 2008. Now with their debut album ‘Night is for Hunting’released, they are set to go from strength to strength.
Produced by Darren Middleton from Powderfinger and co-produced by David Kahne (Paul McCartney, The Rubens, Lana Del Ray, The Strokes), ‘Night is for Hunting’ showcases bands trademark hook driven, rock tunes. Winning Best Rock Album at the 2013 Music Oz Awards, their debut album features the first sinlge “Should’ve Told Me” and the “Bittersweet Symphony” inspired track, “Photos”.
Among their many achievements, July Days have shared the stage with Australian rock legend, and Powderfinger lead guitarist Darren Middleton at his 2013 album launch. Their Debut EP also received strong rotation from community radio, along with syncing on TV shows such as The League (USA), The Block, The Project. They have fronted the main stage at the 2011 St Kilda Festival, and played a 14 show UK, including landing a spot at the Edinburgh Fringe Festival.
July Days’ debut album “Night is for Hunting” is OUT NOW!
Download July Days’ album ‘The Night is for Hunting’ on iTunes HERE
Website: http://www.julydays.com.au
Twitter: https://twitter.com/julydaysband
Facebook: https://www.facebook.com/julydaysband
YouTube: http://www.youtube.com/julydaysband

One thought on “New Music: July Days ‘Night Is For Hunting’”