“I’m thrilled to finally have these two albums available again’ says ICEHOUSE frontman Iva Davies of the joint release of the soundtrack to the 1984 Russell Mulcahy film, RAZORBACK, and the 1985 ballet, BOXES. “Neither album has been available digitally before and the CDs have been out of pressing for many years. I’ve constantly been asked when these would be available. This being the 30th Anniversary of Razorback, it seemed like a good time to get the music out again and with the help of George Ash and the team at Universal Australia, we’ve made it happen”.
Originally released in 1984, RAZORBACK is the soundtrack to Australian film and video director Russell Mulcahy’s first full-length feature film. It was composed and recorded by Iva using the then very new technology of the CMI Fairlight CMI digital sampling computer (see below) which enabled him to explore a new world of soundscapes. It went on to win its composer an APRA Award for “Most Performed Australasian Music for Film”.
The ballet BOXES was first performed in November 1985 at the Sydney Opera House and is considered the Sydney Dance Company’s most successful ballet ever. Iva Davies, and then ICEHOUSE guitarist Bob Kretschmer, composed the score for the ballet as a collaboration with renowned choreographer Graeme Murphy of the Sydney Dance Company. The original season of performances featured Davies and Kretschmer plus guest percussionist Masaki Tanazawa live on-stage interacting with the dancers.
Both albums have been remastered for the release.
RAZORBACK and BOXES are released by Universal Music Australia and are available from all good record stores from today as a double album set and on iTunes as a set or sold separately.
www.icehouse.com.au
www.facebook.com/Icehouseband

Icehouse announce two club shows with special guest Michael Paynter joining the band on stage.
When they returned to the stage a couple of years back, Icehouse played two gigs that solidified their decision to return to the stage; one at the Belmont 16s Sailing Club, and the other at Sydney’s Rooty Hill RSL.

“One of the first shows we played was at Belmont Sailing Club and I have to admit it was a bit daunting on the night. However, my fears were completely unfounded – the show sold out, the audience were fantastic and we had a ball. Then a few weeks later we were at Rooty Hill – the same thing happened with a wonderful enthusiastic crowd,” said frontman Iva Davies.

In a way of thanking the good people who attended these comeback gigs, the band decided to revisit the venues in preparation for an upcoming outdoor show on Rottnest Island.
Michael Paynter will also be joining the group for the unique shows performing both with his own band and also joining the Icehouse boys on stage for what is tipped to be two very special performances.
Icehouse promises to play a number of tracks from their extensive catalogue that includes over 30 Top 40 singles and 8 Top 10 albums.
It wasn’t until they released their platinum selling best of album, ‘White Hear: 30 Hits’, that the group decided to return to the stage following a 16 year hiatus. Since their return they have played numerous sell-out shows and festivals, and have most recently toured as ‘Dubhouse’ where they performed reggae versions of their classic songs.

Iva Davies from Icehouse has paid tribute to the late Chrissy Amphlett. Iva released the following statement after Chrissy’s death. “It is with great sadness that we have received the news of the passing of Chrissy. Chrissy and the Divinyls played with us on scores and scores of occasions and I was always a great admirer of her as both a writer and a performer. Chrissy did me the great honour of recording her version of one of my songs, “Love in motion”, in the early nineties. She made the song distinctively hers, with her own smoking, seductive and unmistakable style. I was recently asked by The Age to nominate my choice of the Top 10 Australian singers of all time. Chrissy was among my choices, of course. She was a pioneer, and a great spirit”.
RIP Chrissy x

Icehouse frontman Iva Davies teams up with the man who co-wrote the number one smash Electric Blue – John Oates to perform before a massive Melbourne crowd at The Plenary last week.

Not long now till the Hall & Oates / Icehouse show hits Aussie shores. Here’s Icehouse in a flashback from 1988!

Hall and Oates – Out Of Touch
It’s confirmed! Icehouse will tour with Hall and Oates! Both will team up for a tour of Australia next February playing Aussie wineries and Entertainment Centres.
ICEHOUSE / HALL AND OATES TOUR – FEBRUARY 2012

Tickets are on sale Wednesday, September 7 through www.ticketmaster.com.au.

Here’s the exclusive album trailer for ICEHOUSE ‘White Heat: 30 Hits’ – released August 26! Order your copy before August 12th and get yours signed by the great Iva Davies! Some ripper AUSSIE tracks in there… Electric Blue, Crazy, Can’t Help Myself, Hey Little Girl and the big tune for ‘theaussieword’… GREAT SOUTHERN LAND! 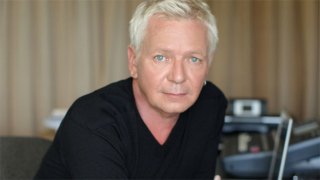 Icehouse will be performing at the Espy in St Kilda Melbourne tomorrow night July 9th – a gig free of charge!
The band made news recently after the release of a special free download, made available via their website. The download, an exclusive concert filmed at the very beginning of their music career.
Next on the cards for Icehouse is a greatest hits album titled White Heat: 30 Hits which is due for release in August. The disc to feature a double CD set with 15 tracks going all the way back to the album Flowers. The release will also present a DVD for fans with all of Icehouse’ music videos.
Iva Davies made the following statement:
“Following the release of the Flowers ICEHOUSE 30th Anniversary edition earlier this year, I was overwhelmed by the incredible amount of support and enthusiasm there was out there for the entire ICEHOUSE catalogue. Many of the requests for what to put out next focused around some of the compilations we had released in the past.
“I looked at the past sets and realised that there had never been a collection of every single we’d ever released throughout the history of the band nor a DVD compilation of every clip so that’s what we decided to do. Our criteria for the inclusion of tracks was that they had to have been released somewhere in the World as a single AND have had a clip made for them (in a couple of cases, two clips!).
“Now that is all together, I’m truly excited about releasing an album with these songs that fans have loved over the years and which were the focus of the different albums. This will be the first time that the majority of these recordings will be available to be legitimately downloaded through iTunes and other digital retailers as well a 3-disc packaging in retail stores. It is great that people who may only know ICEHOUSE by one or two of the songs will be able to explore the other recordings as well.
“The DVD of all the clips brought back many memories of all the people who participated in ICEHOUSE’s success and is a fun look over the past 30 years of music and video making for me.
“I hope everyone enjoys having all our Hits in one place at long last”.
Icehouse – Crazy

Icehouse fans, get to Facebook and ‘Like’ the group for your free Flowers Icehouse Live Concert Download!
The recording was taken from Centenary Hall in Melbourne on June 19, 1980. 3RRR have been kind enough to allow Icehouse to make this concert available for free for all their friends, fans and supporters!
Icehouse have released the 30th Anniversary Edition of Flowers, an album that brought us top 10 hit Can’t Help Myself and We Can Get Together. Icehouse is well known for it’s number smash from 1987 – Electric Blue. A track that oozes complete 80s nostalgia. More Icehouse news at www.icehouse-ivadavies.com
Icehouse – Electric Blue