The only child of John Lennon and Cynthia Powell (his father’s first wife) Julian Lennon needs little introduction. Having just released an expanded version of his sixth album Everything Changes Julian Lennon took time out to speak to Music-News.com after a special screening of his new documentary Through The Picture Window in Soho House Hotel, central London.
The new documentary Through The Picture Window showcases and examines Julian’s work and relationships: what motivates and informs them; and in doing so, frames a revealing portrait of Julian Lennon the Artist: the inside truth about his music, his philanthropy, and his new-found love of photography.

The lush and stylised film is packed full of fascinating imagery and exclusive interview footage featuring the likes of Bono, Steven Tyler, and of course, Julian himself. The interactive viewing mode of the documentary with animated butterflies tempts the user to explore the songs, videos and other content.
Julian has also embraced modern technology in delivering his art to his fans with an all-encompassing app including the 14 videos, acoustic versions, all in audio, film and visually interactive format.
VVN News 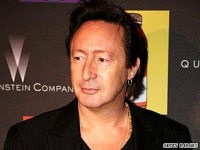 Julian Lennon, the son of the legendary John Lennon, has signed a deal with Conehead for his next record. Julian’s new album Everything Changes will be his first album release since 1998. The record, expected to be hit record stores on September 26 will feature the single Lookin’ 4 Luv which out on September 12.
Julian Lennon – Saltwater (Live 1991)