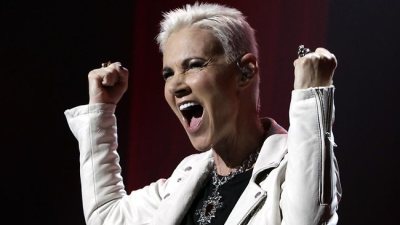 There is plenty truth in the saying ‘they came, they saw and they conquered ‘. Roxette in fact did that to the largest of proportions at Rod Laver Arena in Melbourne! Roxette, supported earlier on by the greatest unsung heroes of Australian Pop/Rock 1927. It was a night to remember, the classic hits from yesteryear, a trip down memory lane, it was a complete 1986 tape rewind with a display of true pure Roxette brilliance as they sang through decades of a #1 hits, forgotten classics and new songs from their latest album Charm School. Per Gessle had tweeted earlier that Roxette had ‘owned Sydney’, little did they know that a few hours later, they would also own the hearts of a passionate and nostalgic Melbourne crowd.

I heard them all, Dangerous, Dressed For Success, Listen To Your Heart, It Must Have Been Love, Fading Like A Flower, Wish I Could Fly, Sleeping In My Car, The Big Love, She’s Got Nothing On (But The Radio), The Look, Spending My Time, How Do You Do, Joyride… the hits just kept coming, it was a show to remember. This was one trip down memory lane that I will never forget. Tickets still available for their final Melbourne show on Wednesday at Rod Laver Arena – do yourself a favour and see this one. For an added bonus, you get to see 1927 belt out the classics If I Could, Compulsory Hero, That’s When I Think Of You, You’ll Never Know… this spectacle from Roxette and 1927 is by far the highlight of performances in 2012.

Roxette return with new singles Speak To Me and Way Out, tracks taken from the new smash album Charm School and follow on tunes from the successful debut single She’s Got Nothing On (But The Radio). Roxette will take Australia by storm this coming February 2012 with the much anticipated and spoken about tour of the summer! Melbourne will welcome the Swedish pop group on home soil at Rod Laver Arena on Saturday February 18. One huge party!

Per Gessle and Marie Fredriksson give us all a wee little insight into new album Charm School, the tour, the comeback and the band Roxette! February cannot come quick enough.
The Roxette Comeback Story with Per and Marie!

BELIEVE IT peoples! It seems my petition and persistence in getting Roxette out there into the twitter-sphere worked a miracle! Hopes of a Melbourne concert have now been confirmed, with the dream now a reality!
ROXETTE have just announced a special Melbourne show for February 18 at Rod Laver Arena! Tickets on sale from Ticketek on August 29.
Roxette – Joyride (1991)

ROXETTE are set to head to Australia to play a special gig in Sydney at the Entertainment Centre on February 17. It has been 17 years since we have seen the popular Swedish group on our shores, the most successful to come out of Sweden since ABBA.
Marie Fredriksson and Per Gessle have given the world a list of hits, including The Look, Listen To Your Heart, Joyride, Fading Like A Flower, It Must Have Been Love, Dressed For Success and Dangerous! Marie has had a troubled recent past when she was diagnosed with a brain tumour, she has undergone rehab and then took time out to get back with Gessle and release the new album Charm School. At this stage, Sydney is their only destination for a tour stopover, it’s a shame as Melbourne would really love to see the group rock the cores of Rod Laver Arena!
SURELY there are more than 20,000 Roxette fans out there to warrant a Melbourne show announcement? I ask the people of the world to get behind me on this one! PLEASE!
Roxette – The Look
Roxette – Fading Like A Flower
Roxette – Listen To Your Heart