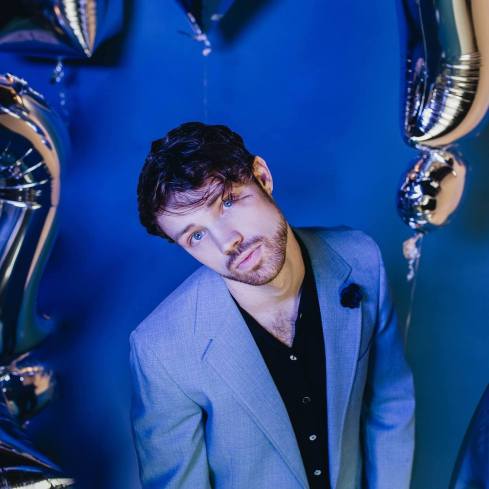 Give us an introduction. How did it all begin?

Hello friends. I’m Chris Jobe, I live in Nashville, TN, USA- originally from 5 hours north of here. I came here for college and kinda loathe country music but find my solace in indie electro pop as both an artist and producer.

I’ve always loved music from a young age. My dad was a heavy metal singer in the 80’s and my mom was a painter so bouts of singing  and the smell of oil paint was heavily circulated in my house growing up. I got a guitar for Christmas in 5th grade and shortly thereafter fell in love with songwriting after my parent’s split a little later.

Definitely my parents and I really was obsessed with The Red Hot Chili Peppers for a good bit- them and Jimi Hendrix inspired me early on to learn the guitar. The Killers also inspired me to write at the time.

Homies who are better than me, new artists, and new music! In Nashville and LA there’s some incredible musicians and I’m always listening and asking them what moves them. I’ve currently been on a Whethan and Louis The Child kick so I have been cranking out a lot more indie electronic pop stuff 🙂

I would love to tour Australia, they have some of the dopest artists like Chet Faker (Nick Murphy), Flume, Tame Impala, Kllo, and BAYNK to name a few. I think the pop movement there is super unique and rad. I’d also love to play the red rocks amphitheater in the states and maybe one get a feature with someone in the hip-hop world like Drake or Kendrick. I love their stuff. Get a Grammy. Hang out with Frank Ocean or Justin Vernon.

RESURFACING SOCIALS WITH NEW MUSIC and NEW MUSIC VIDEOS! WOOT. And then yeah a tour late this year with a few festivals in the States. My music seems to be getting dancier, which is fun so I think more and more shows will happen once we get rolling on tour. I have a feeling this new stuff will be a bit more contagious in that respect.

Tell us a bit about your latest album and how would you best describe your music?

The latest single Lonely Lives is an electronic indie pop bop. It’s about how I recognized a friend’s struggle and sadness and when I went to confront them, they put up a wall and acted as if everything was cool. I’ve found myself doing the same thing and thought it was ironic that all these lonely lies are leading us to lead lonely lives- which kinda became the hook for the song. The production is super shiny, liquid-like with the way the synths move, and then pretty hard hitting in the chorus. Much of my music can be described as emotional bops haha.

I was hoping you’d tell me mate 🙂 I’ve had a viral video on FB and was the global FB artist of the day a while back and have had some other cool things happen, but I guess the secret sauce is that anything cool that’s happened has happened around stuff that moved me or got me hyped in the first place.

What has been your biggest career highlight?

I guess the FB thing was super cool. Having something of yours played over a million times is pretty exciting. I had the music video for “Lonely Lives” recently featured on One’s To Watch and Earmilk and I followed those guys for a very long time. I was almost arrested for making that video in NYC, def a highlight. I’m also really hyped that I have some festivals coming up with major acts this year too.

Star wise? Ryan Tedder, that dude is a hit making machine and same with Sia, Diplo and Flume. I also love Odesza, Louis The Child, Kendrick Lamar, and not to mention those Australian artists I mentioned!

Any new projects in the pipeline?

Yes I have a new single called “Cry” coming out Feb 8th that definitely rivals “Lonely Lives”. It smacks.

Festivals, big artist collabs, a few number ones, and I’ve always said I wanted to have at least one grammy by the time I’m 30. That may sound like a lot, but you’d be surprised to hear the shit I was making about a year and a half ago. Its already been a journey in a good way. Without getting too preachy, at some point in my career I would love to open up music centers for kids in economically depressed places. Music has such a cool way for healing, communication, and elevating people past their disposition.

OH MAN. That’s a biggie. I think more than ever, people are worried more about the image than music which sucks. You see a ton of insta models or influencers turning into artists, some good, some not. I just try to stay in the lab and keep my head down and get better without insta storying myself in front of a mic every 24 hours.

No thank you! YO YO YO Check out “Lonely Lives” and look out for “Cry” coming out on 2/8! Also hit me on insta and twitter to keep tabs on new tunes, shows, and we will be doing some giveaways on some cool gear soon too. Go hug your mom!