theaussieword.com meets with Melbourne Football Club legend Jeff White in this very special exclusive interview!
Where has Jeff White been since leaving the AFL?
Thanks for having me guys. What have I been doing? When I retired at the end of 2008 I moved to the Gold Coast where I still live today. I first visited the GC in 2001 and fell in love with the place. In March 2009 I started working at a local radio station here in the sales and marketing. I worked there from March 2009 – August 2011. In February 2010 I started a social media company called White Echo where I am today as CEO/Founder. From 2009-2012 I was also the ruck coach at the Gold Coast SUNS. Coaching was never a preference of mine but it was great to still be involved in the system. I now help companies all over Australia implementing, monitoring and assisting their social media platforms. Since February 2010 we’ve supported over 70 companies Australia wide. I’m now getting back into my golf with a tidy handicap of 5 and have a beautiful family. Wife Stacy of 8 years and 3 boys, Kalani 6 and identical twin boys, Tahjy and Kaimana who will turn 3 in January.

You reached some great heights playing for the Melbourne Football Club, what was a career highlight for you?

You have just released your first ever e-book The White Instincts, tell us a bit about the book and what it means to you to give readers an insight into your life.
Well I first initially started writing the book about social media. I started writing the book in November 2012 – with no title – I just started writing about the power of social media and the biggest opportunity that businesses where missing out on. Then after re-thinking the strategy of the book I realised that it would be dishonest to ignore the most exciting part of my life, playing AFL. So the mix of the book relates to the many experiences I went through during my 14 year career and the passion I’ve found with social media. The White Instincts comes from that inner motivation that drives my passion everyday. Everyone has an inner motivation but many of us don’t know how to either control it or trust it. I thoroughly enjoyed writing the book and I hope people can get a real sense of what drove me to maintaining a consistent mental and physical preparation at an elite sport for 14 years and how I now channel that same passion and motivation to servicing clients with social media. 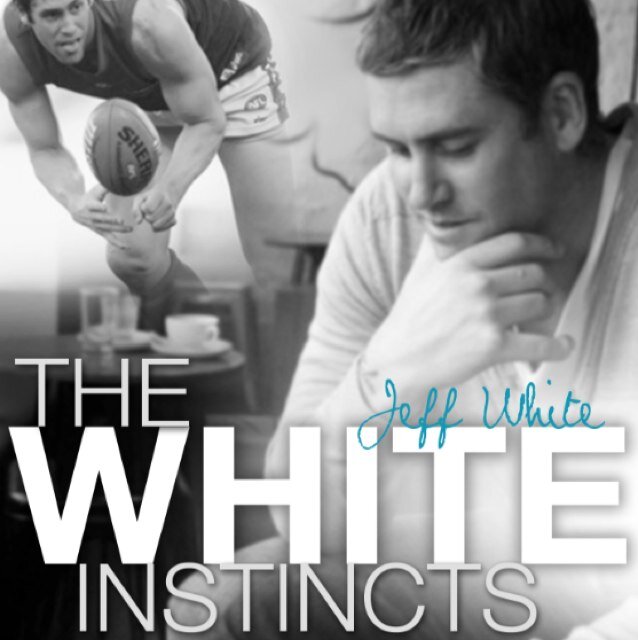 What inspired you to put The White Instincts together?
Many retiring AFL players write a book straight after their careers. Certainly nothing wrong with that but I wanted to write about finding a passion outside of my career. Many AFL players don’t know what to do after they retire and some find the change a real challenge. I wrote the book to hopefully provide some inspiration for those retiring players but to also provide the football world a little insight into how I made the transition. When players retire unless they stay in the system as a coach you never hear what the next phase in their life is and I guess this is my way of telling my story through The White Instincts.

White Echo is something you established after retirement, tell us how this came about.

Well it actually came about through my own fault. I created my Twitter account @JeffWhite34 in March 2009. I had no idea what Twitter was all about but through answering fans in relation to the Demons poor form in 2009 I found my tweets ending up in blogs and even journalists ringing me to publish what I was writing. It was in no way bad comments but the instant power had me thinking “are businesses tracking conversations on Twitter? Do they have a Facebook page so they can engage with customers, instantly?” So I started to research this power and how companies in the US where managing their social media. I remember seeing Justin Bieber appearing on Sunrise during that year and you could tell the Sunrise team had no idea who Justin was. They themselves at the time weren’t implementing social media at all and Justin had only been the leading trending topic for 6 straight months. So for my paid on-air clients at the radio station I started delivering a social media service for them for free. I would not only put their radio campaigns together but I was posting on their Facebook page and Tweeting for them for FREE. All of a sudden I had other businesses ringing me about supporting their social media and not radio. Because social media is instantly measurable, this is what businesses wanted. So then and there I knew there was a need in the market and in February 2010 I launched White Echo. First ever client: PGA golfer an current World Number 2, Adam Scott. Was certainly a great start and now we assist brand such as; Mercedes-Benz, Outback Jacks, Naked Tan, Bartercard and a up and coming AFL player by the name of Gary Ablett Jnr (wink wink)
What is it like for you to be able to engage with your fans and followers via your social media channels compared to when there was no Facebook and Twitter while you were playing AFL?

Well that’s one thing I wish I did have, social media whilst I was playing. This is a key strategy now when working with Gary Ablett Jnr for example. My strategy with Gaz is to help him not only build a great relationship with his fans – watch this cool video we did for him on YouTube – but it’s also about building his database so when he walks away from football he can takes these fans into the next phase of his life. Many sporting athletes under estimate the power this has. It may not suit them now to be apart of social media but at the end of the day their a brand and they need to take advantage of this exposure. Whether they like it or not, their brand needs to live beyond their AFL careers and building a database of followers now will only enhance their brand post retirement.

Something for us Demons fans now… that goal, yes the goal against the Bulldogs in 2005… Complete DEElirium for us Melbourne supporters! It was a tight angle, what was going through your head? Take us through that final frantic minute!

Well it was a childhood dream. It was an important match that we had to win to secure that final berth in 2005. I guess the only thing that would top that would be kicking the winning goal after the siren in the grand final. I was awarded the FREE kick for an off the ball shepherd from Wade Skipper. Ben Holland and I during that year had worked together – especially in the fwd line – on third ups at ball ups and throw ins. Benny came over to me and said “ I’ll post up against Will Minson and you come over the top and flick the ball into space”. The Bulldogs has flooded their players back into our fwd line, it was the 30 minute mark. As I was about to jump at the ball Wade – with only eyes on me – laid a shepherd and I went flying to the ground. The free kick was on a 45 degree angle, about 45m out I think. I remember Travis Johnstone coming over and saying “just like junction oval practice Whiteman”. I always kicked with a slight draw – especially long kicks – and I reckon to this day that my love for golf, the preparation and mind set you have for each shot put me in the right space. Not once did I look at the clock. I just focused on inside right post to allow for my slight draw. All I visualised was the ball spinning perfectly off my boot. So I lined it up, aimed inside that right post and it was pretty much perfect, I couldn’t of flushed it any better. Goal and we clinched a finals berth.
Thanks for the interview today Jeff! What can you leave theaussieword.com fans with here today?
It was a pleasure and thanks for having me. I would love your readers to download my book, The White Instincts. I share some great stories, talk about how my career nearly ended in 2003 and tell a once in a lifetime experience with THE great Michael Jordan. Feel free to touch base with me via my social media platforms below.
Website: www.jeffwhite34.com & www.whiteecho.com
Facebook: www.facebook.com/JeffWhite34
Twitter: www.twitter.com/JeffWhite34
Instagram: www.instagram.com/JeffWhite34