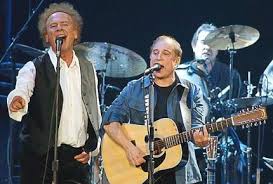 Paul Simon’s catalog has been ripe for the picking over the years and Legacy will add to that long tradition on October 15 with Over the Bridge of Time: A Paul Simon Retrospective (1964-2011).
This is the tenth hits collection released of Simon’s solo career to go along with over ten addition Simon and Garfunkel collections.
The new collection will be released on the same day as the 15-disc Paul Simon: The Complete Album Collection which includes full versions of twelve studio and two live albums along with bonus tracks.
For the first time, this collection includes songs from both the Simon & Garfunkel and solo periods of Paul’s career, starting with Sounds of Silence and running through Love and Hard Times from 2011′s So Beautiful or So What.

From the press release:

In Legacy tradition, the songs are sequenced chronologically, beginning with The Sound Of Silence, the first single from Simon & Garfunkel (composed by Simon) to work its way into the collective American psyche in late-1965. America, first included on S&G’s 1968 LP Bookends, is forever linked with the closing scene of 1968′s The Graduate, as the two star-crossed lovers run away together at the end of the film.

The Paul Simon solo era was launched in 1972 with a pair of singles that are airplay staples today as much as they were four decades ago, Me And Julio Down By The Schoolyard and the Hot 100 Top 5 hit, Mother And Child Reunion (both from his eponymous debut LP, Paul Simon). Two of Simon’s most beloved and enduring LPs arrived in the ’70s: There Goes Rhymin’ Simon, the first of several albums that Simon co-produced with the legendary Phil Ramone (1973, with American Tune); and Still Crazy After All These Years (1975, winner of Grammy Award for Album Of The Year and Best Male Pop Vocal, containing Simon’s Hot 100 #1 hit, 50 Ways To Leave Your Lover and the gospel-tinged title tune).

The ’70s closed with his first compilation LP, Greatest Hits, Etc., which included previously unreleased [new] song, Slip Slidin’ Away, a Top 5 hit featuring the country-gospel Oak Ridge Boys vocal quartet. The decade of the ’80s began with One-Trick Pony (1980, associated with the movie in which Simon starred, including the Grammy-nominated Top 10 hit, Late in the Evening). The title tune of 1983′s Hearts and Bones album, with its theme of two lovers (“One and one-half wandering Jews”) traveling on the road, harkened back to America.

“You could look at my work as divided into three distinct periods,” Simon has said, “Simon & Garfunkel, pre-Graceland solo albums, and Graceland to the present.” Indeed, the pivotal Graceland album of 1986, Simon’s first collaboration with the South African group Ladysmith Black Mambazo, was a breakthrough event whose impact on the worldbeat scene reverberates today. Graceland generated 5-times RIAA platinum sales and went on to win the Grammy Award for Album Of the Year. It is well-represented on Over the Bridge of Time with Diamonds On The Soles Of Her Shoes and You Can Call Me Al.

Graceland had a profound effect on its composer as well, whose ’90s explorations into reggae, worldbeat, Latin music, Cajun/zydeco, and beyond were part of the chemistry of his next album, The Rhythm of the Saints (1990), whose Spirit Voices featured vocals by its co-writer, the great Milton Nascimento. The Rhythm of the Saints received Grammy nominations for Album Of the Year and Producer Of the Year (for Paul Simon).
With much of the next decade devoted to the production of The Capeman, Simon’s 1997 Broadway musical, his next studio album as a solo artist did not arrive until a full ten years after its predecessor. But You’re the One (2000, represented by its opening track, That’s Where I Belong), was such a critical and commercial (Top 20) success that it received a Grammy nomination for Album Of the Year. With that, Simon became the first artist ever nominated in the category over five consecutive decades (’60s-’70s-’80s-’90s-’00s).
Simon, who celebrated his 70th birthday in 2011, has continued to fascinate and inspire old and new fans alike with his most recent albums. 2006′s Surprise (Everything About It Is A Love Song), was recorded in New York, London and Nashville with Brian Eno.

In 2011, Simon released So Beautiful or So What (Love And Hard Times) to overwhelming critical acclaim. It is considered one of the best records of Paul Simon’s legendary career, receiving 4 Stars from Rolling Stone Magazine, with the Los Angeles Times proclaiming “So Beautiful or So What, steeped in Afropop and American folk forms, climbs some of the most resplendent summits of Simon’s career.”
Track List:
The Sound Of Silence
America
The Boxer
Cecilia
The Only Living Boy In New York
Bridge Over Troubled Water
Me And Julio Down By The Schoolyard
Mother And Child Reunion
American Tune
50 Ways To Leave Your Lover
Still Crazy After All These Years
Slip Slidin’ Away
Late In The Evening
Hearts And Bones
Diamonds On The Soles Of Her Shoes
You Can Call Me Al
Spirit Voices
That’s Where I Belong
Everything About It Is A Love Song
Love And Hard Times