theaussieword.com had the pleasure of catching up with the very talented Mark Wilkinson for a very special and exclusive chat!
What can you tell our readers about you? How and where did it all begin? 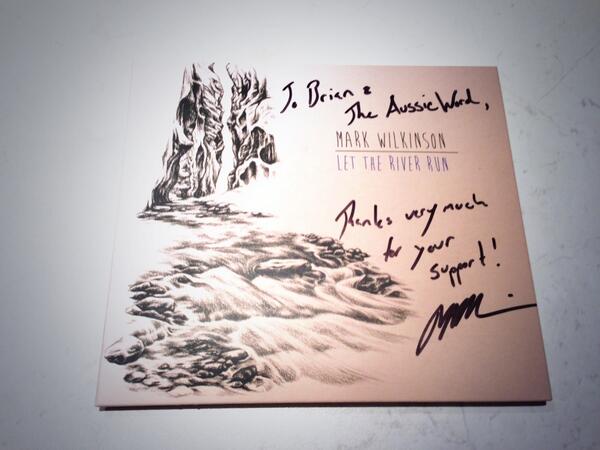 I guess music and songwriting started relatively late for me. I played a little piano and cello when i was really young but it wasn’t until I finished high school that I actually picked up the guitar for the first time. Pretty soon after learning the basics from a friend of mine I started writing songs. I became pretty obsessed with it I guess. I never expected it to become my career, I just enjoyed writing songs, but slowly things evolved and music eventually became my full time profession.

I loved music growing up, like most people I guess. My parents listened to a lot of classical stuff, but I remember in amongst it were the Beatles, Dire Straits, Queen and Fleetwood Mac. I guess these were the bands I listened to and loved first. I had pretty varied musical taste growing up and still do, but it’s the emotive singer songwriter stuff that gets me the most, particularly from a songwriting perspective.

Who motivates or influences your quest to make great music?

I guess the main motivation is that music is so enjoyable to play. There’s no better moment for me than when you feel like you’ve created a really beautiful melody and I think I’m always striving to write something that gives me that buzz. Lyrically I often draw on personal experiences, but inspiration also comes from hearing about other people’s lives and stories intermixed with a bit of imagination at times.

Do you have any planned tours coming up?

I’ve just released a new studio album called “Let the River Run” and will be touring around Australia through August and September to promote it.

What are some of your biggest goals you hope to accomplish as an artist?

I hope to be able to write and perform music for the rest of my life and do so to audiences all over the world. I’ve been lucky enough to perform as a support act in some pretty amazing venues like the Entertainment Centre. I would love to be able to play in these types of venues as the headline act…I just have to convince enough people to come!

What can fans expect from you in the coming months?

Well, I’ll be playing a whole bunch of shows in major cities all over Australia and my latest studio album is just now available worldwide. I’ll also be touring over in the US later in the year which should be a lot of fun, and am hoping to sneak over to New Zealand after that.

Success, what is the secret to it and what has been your biggest career highlight so far?

I think keeping the fun in what you do. If you feel inspired and love what you are doing then it really shows in your performance and it’s infectious. For me it’s about trying to create new music all the time and challenging yourself to better what’s been.

I’ve drawn a lot of inspiration from artist like Passenger, Ben Howard and Ed Sheeran. Not only are they extremely talented, they work incredibly hard. I think it’s this kind of passion and commitment that draws the loyal fanbase that they have behind them.

How would you best describe you and your music to your fans?

Haha I prefer when other people describe it to be honest but, I guess I try to make music that is honest, passionate and emotive. I love music that moves you emotionally and I hope that my music can achieve that connection with other people.

What can you tell us about your latest album?

My producer, Ollie McGill, and I tried to make an album that blends really interesting and unexpected sounds with something that sounds really natural as a whole. It’s very much an acoustic singer/songwriter album, but there are still tracks on there that we felt really lent themselves to fuller production. It’s quite a diverse album I think in terms of the production and feel, but we were still conscious of trying to create something that sounds cohesive.

Are there any new exciting projects in the works?

I guess the new album has been the focus for the last 6 – 12 months and now the concentration will shift to getting out there and playing live as much as possible.

I really hope to grow my presence here in Australia but overseas as well. I did a short European tour earlier this year which went really well and will be touring in the US later in the year which I’m really looking forward to. I hope to build on my OS audience over the next few years and make those markets a significant part of my touring schedule.

The shape of the music industry has changed significantly over the years, including the use of social media, how do you feel about the industry as a whole and what does it mean to you in getting your records out into the public eye?
I think social media has made access to loads of music so much easier. I guess you could argue that it’s hard to get exposure simply because there’s so much stuff out there and it’s hard to capture people’s attention. On the flip side though, because music is so prevalent in social media, there are lots other avenues outside of radio to get your stuff heard. I think it creates a much more level playing field because everyday people are more in control of what gets heard, so if something’s good enough, it will find an audience

Thank you for the interview! What can you leave fans of theaussieword.com with here today?

Thank you for your time, I hope you enjoy the music, and with any luck I’ll catch you at a show soon 🙂
Website: www.markwilkinsonmusic.com
Facebook: www.facebook.com/markwilkinsonmusic
Twitter: www.twitter.com/mark_wilkinson